How Happy Trails Saved Over $90,000 in Sales Over Four Months

"Thanks to Crazy Egg, we’re fixing issues within one or two checkouts instead of missing a couple dozen. That’s around $90,000 saved over the course of four months because of the tool."

Happy Trails is a family-owned off-road motorcycle business. They sell parts, gear, and accessories for off-road, dual-sport, and adventure motorcycles through their online store. 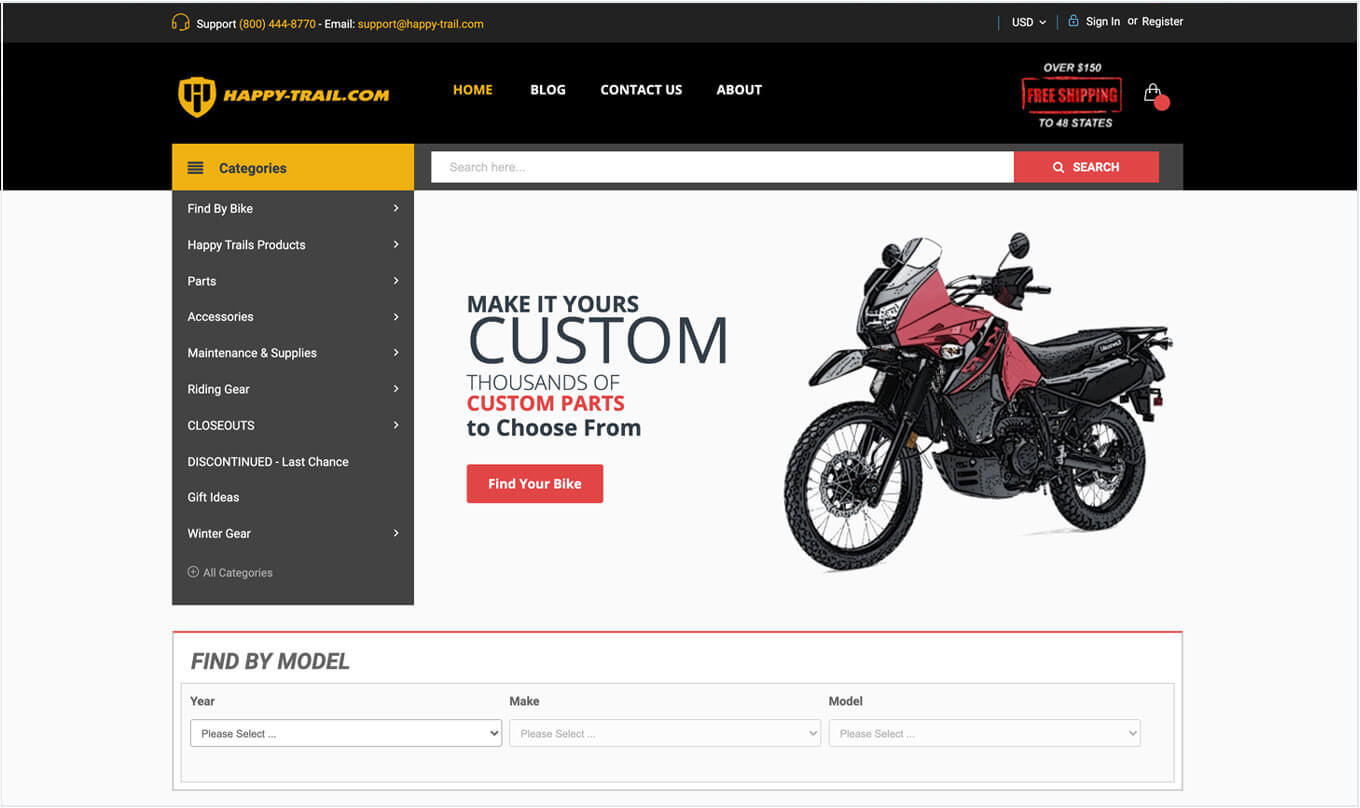 When Casey Ralls became the co-owner and Web and Marketing Director of Happy Trails in January 2020, his first priority was fixing and updating the company’s e-commerce website.

"The site was not functional, essentially," Casey recalls. "People would not be able to place orders because an update to a software application or an extension would break something. And we wouldn’t know it until a customer told us."

Casey dove right in and began to make the much-needed changes, dissecting the site, recoding pages and adding dozens of extensions for functionality. But with the constant changes, Casey knew he had to watch out for high “code turmoil,” breaking other parts of the website’s code while trying to fix specific issues.

"When you’re making those kinds of changes, you’re basically in a constant beta release stage,” he explains. “When you change one piece of code, you don’t know what that’s doing to the rest of the code, and how it’s affecting something else. A lot of times, when you make a change, you break other things that you didn’t mean to break."

Casey knew the changes were necessary, but he needed a way to monitor the website’s functionality and fix issues that came up before they cost the company sales.

He needed to be able to see what users were doing, how they were interacting with the site, and any roadblocks they were running into.

"Just because I can go through the checkout doesn’t mean I’m using it in the same way a customer is," he adds.

With more information on how customers used the website and where they were clicking, Casey knew he could spot issues quickly and resolve them before they cost the company lost sales. Plus, he would be able to give his customers a better user experience and streamline the checkout process for them.

"People would not be able to place orders because an update to a software application or an extension would break something. And we wouldn’t know it until a customer told us."

Comprehensive insights into user behavior on the Happy Trails website

When Casey found Crazy Egg, the tool’s feature list immediately convinced him to try it.

"We started off doing the trial, and then we quickly switched to the yearly plan,” Casey says. “I just found it to be incredibly valuable."

Casey particularly appreciated two of Crazy Egg’s key features: the user recordings, which gave him video playback sessions that showed exactly how customers used the website on different devices, and the snapshots, which generate reports showing where users are clicking.

"With the snapshot tool, I was able to generate heatmaps and see where people were interacting with our top landing pages," Casey says. "I realized that a lot of interaction was happening below the fold. So I was able to bring those more popular elements up front and center to focus more on those sales."

"As a result, customers were able to find their way through a lot better."

Changing the landing pages helped Casey streamline the website, but even more importantly, now he could also keep a close eye on the site and spot functionality issues as they came up.

"I was able to fix major issues that were preventing people from checking out within a couple of visits, rather than missing thousands of dollars of sales for three and four days and not knowing where the problem was," Casey says.

As he continued to work on updating the website, he built checking Crazy Egg into his routine, monitoring it every day to keep an eye on any problems with the checkout process, product pages, and catalogue.

"If I felt like we hadn’t had an order in a while, I would immediately get suspicious and the first thing I would do is go check Crazy Egg to see if there were any issues," he says.

Thanks to his careful monitoring of the user recordings, he noticed that when customers were visiting certain product pages, products that he knew were currently in stock were appearing as out of stock, resulting in missed opportunities and lost sales.

"It turned out to be an issue with our integration, and how we were updating the inventory products,” he says. “And I never saw it until it was revealed to me by Crazy Egg in the recordings."

As Casey continued to update the website, he knew the mobile version needed a lot of work.

"The site was completely unusable on mobile. The menu didn’t work,” he says. “But 60% of the website’s traffic was on mobile."

He knew he could test different resolutions on Google Chrome, but thanks to Crazy Egg, he was able to watch exactly how users were interacting with the site from all different kinds of devices, and see the changes he needed to make.

"I have to know what’s wrong before I can actually fix it, and the recording data was really invaluable for that," Casey says, "It allowed me to test the resolution where the user’s having a problem and fix it. And the next time a user came in with the same device, I could just verify the fix. As far as quality assurance goes on mobile, that has been incredibly helpful."

"I was able to fix major issues that were preventing people from checking out within a couple of visits, rather than missing thousands of dollars of sales for three and four days and not knowing where the problem was."

A more streamlined checkout process and over $90,000 in sales saved

In the first four months of 2020—when Casey was making the most changes to the website and causing the highest code turmoil—he estimates that catching checkout issues early, before they could result in lost sales, saved Happy Trails around $90,000.

"Now we’re fixing issues within one or two checkouts, because I’m keeping an eye on it, instead of missing a couple dozen checkouts," he says. "That’s around $90,000 saved over the course of those four months because of the tool."

Fixing the integration issue that showed in-stock products as out of stock saved them another $4,000.

"The tool paid for itself incredibly quickly, just from discovering that small issue with the inventory not appearing," Casey says. "It’s one of those tools that’s just an important part of doing business."

Another unexpected bonus was the time Casey saved thanks to the data Crazy Egg provided: all told, he estimates he’s saved himself as much as 600 hours of work.

"It helped me target what to fix, instead of going through and testing every possible resolution."

He says, "I’m able to see what resolutions and what devices are actually using the site. And I can focus on those instead of just trying to shoot in the dark." Happy Trails’ sales are up 30 to 35% each month compared to 2019, and Casey says that Crazy Egg was a big contributor to that growth.

"It’s a huge increase in growth," he says. "And Crazy Egg played a big factor in that by making the site easier to use, guiding people to where they need to go, and making the sale as quickly as possible in the least amount of clicks."